BLINK FR is a new generation of fast response laser sensors (patent pending), based on a technology that enables to reach high speeds unreachable with standard thermopile detectors.

The response time is a key parameter for laser detectors where a faster response is required because several phenomena like pointing stability, fast drifts, instabilities can only be monitored if the detector responds very quickly. However, when the detector is fast it cannot withstand high powers (as in the case of all photodetectors) or, vice-versa, when the detector can withstand the power, it is slow (as it happens with thermopile sensors or Peltier devices).

Photodetectors can respond to pulses < 1ns. They can only withstand few milliwatts of direct laser power and their advantage of a fast response is, in most of applications, spoiled by standard readout electronics which curb the response time to 0.1-0.2 s.

Thermopile detectors are inherently slow: their natural response times range from > 1s to several tens of seconds, depending on the maximum power rating. Those natural response times can be reduced by electronics circuits and speed-up algorithms, but cannot be lower than 800ms-1 s, and only in the case of very low power heads. 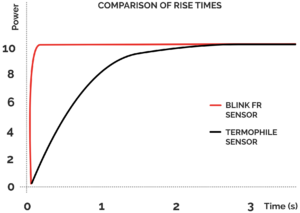 BLINK FR sensors, differently from thermopile sensors, offer an unreached natural (without any acceleration by additional electronics) response time down to 90 ms (typ.). This is a game changing feature for laser power measurement because it paves the way to a number of applications that were not possible before.

There are no reviews yet.